Baby bear #3 is currently preparing to receive the sacrament of Reconciliation.  This will happen next week and as part of the ceremony for receiving all 4 sacraments in my church the children have to wear a white stole.  On the stole are the names and dates of the sacraments they receive.

I had made the other 2 baby bears' stoles - they were beautifully embroidered on my embroidery machine.  I don't have that machine at the moment nor all the computer software that goes with it.

I decided to go plain and simple for this child.

The reason being that since the last sacrament (baby bear #2's first Eucharist 2 years ago) our church has introduced pale blue stoles that must be worn at each service for the duration of the preparation.  They really are lovely and allow the other parishioners to see who is currently preparing and makes the whole process a little more parish friendly.

Well, these little blue stoles have been a constant source of agony for the past 2 months.  This dear sweet sensory sensitive child has hated every minute of having the stole around his neck.  It has been a huge deal for all of us, as it has been yanked off, thrown on the floor, shoved at his sister, put on the seat in front of us, hidden in my handbag...you get the picture?  This child has not coped well with the blue stole.

So, when I mentioned that he had to wear a white stole on the night of the actual ceremony all hell broke loose.  I know, kind of ironic for a religious occasion.  Anyway, I went and bought the things I needed and made the mistake of showing him.  As he was looking through the bag, he turned and stated he wasn't having any of 'that stuff' on the bottom of his (the pale blue Church ones have a very small amount of very fine lace on the bottom), it was then that I knew it was coming.  Melt down.  How do you explain to a child that suffers from the "A" word that there are some things in this world that he just has to suck up and take?

I left him to his melt down.  This time it was in his bedroom and consisted of him tipping out every piece of Lego he owns.  Lets just say his floor was covered.  I didn't say anything, just let it be and made the design.  I did show him before I started - just in case.  It's a case of which is the lesser of two evils, damned if I do and damned if I don't.  Lucky me, he liked it and all was calm again.

I spent the next little while decorating and sewing.  He came to inspect and again insisted that he was not having and stuff on his.  I reassured him I didn't have any of the lace that the church ones have - not telling him that I had bought a very plain but nice white trim.  He found it and said he wasn't having it...I had to think quickly and told him that both his brother and sister had it on theirs and that all white stoles had to have something other than lace or they wouldn't be right.  He studied me carefully before walking away. 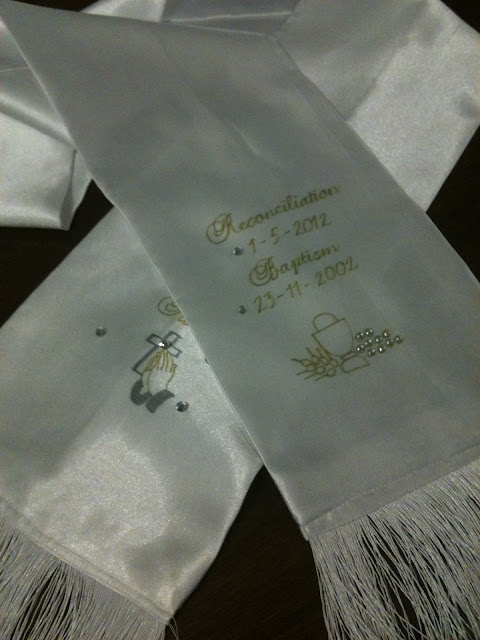 When it was finally finished and I asked him to try it on, I was expecting the worst...but sometimes there are little miracles and victories.  He asked me if I was taking pictures of it and I said yes.  He immediately ran out of the room saying something that I didn't quite catch and he promptly returned with his pin.

Each of the Reconciliation candidates have been given a special gold pin to put on their stoles for the ceremony.  I had to take another photo with the pin. 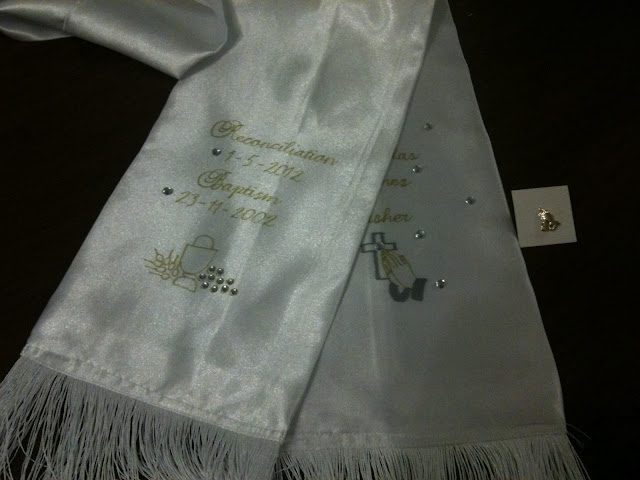 I was feeling pretty happy about it all...until he turned the pin over and looked at the back of it.  Disaster.  He is now refusing to wear it because it is like the Anzac one.  "They poke out at the back and rub on you."

Is it too much for a mother to expect 2 little miracles in the one day with her special child?

I'll let you know how we go on the night of the ceremony...
Posted by Claire at 9:24 PM