As I watched my youngest child on the playground equipment yesterday.
Baby bear #3 has autism and struggles with school and friends.
On Friday he started playing on the new equipment at school
with 4 other children from his class.

Double excitement - using the monkey bar and
playing with (not along side) other kids.

I was on yard duty - doing my normal rounds when they called
me over to watch, away he swang and so proud of himself.

I came back a few minutes later to watch him again,
only this time to see him slip and plummet to the ground,
landing on his elbow.

He didn't move but I did!
He grabbed his arm and said "owie" as the tears came.

We got him in to first aid and his arm was very swollen.
2 of our aides had a look and both felt he needed an xray.

Off to the hospital  we went.
2 1/2 hours later we were back at school - he was
excited about his sling.
I was excited it wasn't broken. 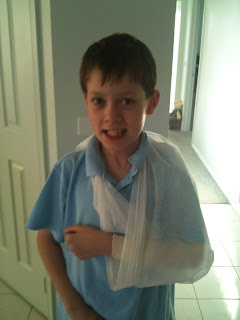 So it's a sling and a support bandage for a few days.
As we are leaving he says to the doctor
"I'm going back on the monkey bars when I get back to school."

Not for the rest of this week.
Posted by Claire at 6:00 AM